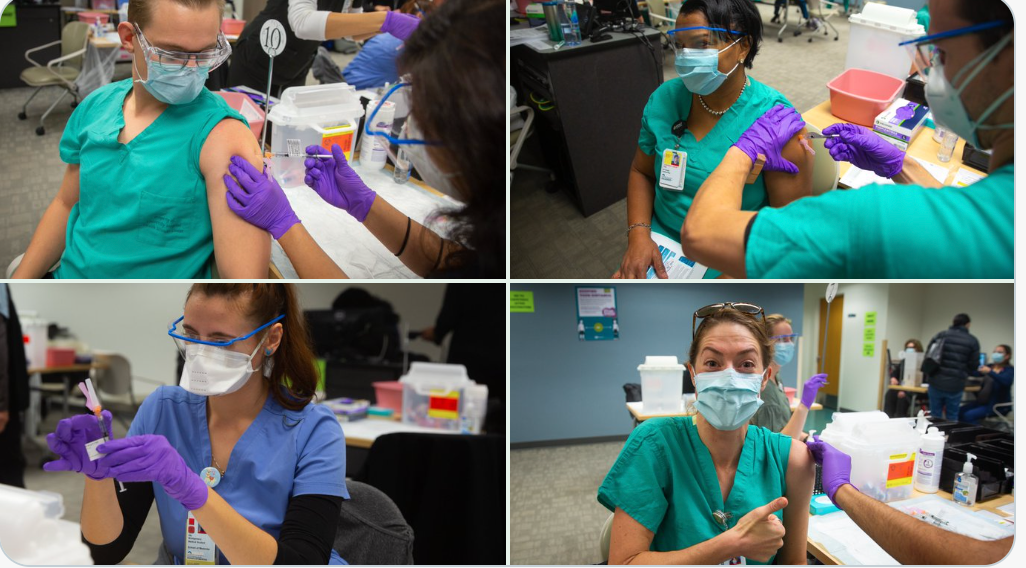 This week I had the pleasure to be a volunteer vaccinator. Day 1 I supervised nursing, pharmacy, and medical students who had volunteered to be vaccinators during their holiday break. Day 2 I was one of the people blessed to be giving vaccines to frontline healthcare workers. The entire event was well organized to make sure not a single vaccine went unused and that the vaccinators were not pulled from the frontline staff, but rather faculty and students. Everyone was prescreened and consented. They were then entered into medical records and the appointment for the 2nd vaccine schedule with an appointment card handed to each person. When each got to the vaccine station everything was triple checked and they were again ask about history of fainting or allergic reactions. Each vaccine was appropriately labeled and rechecked for dosage.

In my career I’ve been part of flu vaccine clinics and many emergency responses, but this felt different. This time the people I vaccinated were my friends, colleagues, and neighbors that had been risking their lives for others for the last 11 months. They were tired and stressed, but when the needle went in their arms it was as if months of fatigue and stress melted away. The expression was a cross between relief and gratitude. And yet, with each vaccine my sense of respect and love grew for them. They served knowing the risk and when they got vaccinated not one responded as if it were owed to them, but rather they were grateful. These men and women who had given their all for months were grateful to us because as one young man said to me, we were told that all of you volunteered your time to help us. I almost cried looking at what months of wearing a mask had done to the bridge of his nose and he was thanking of us. It gave new meaning to selfless.

When I became a nurse I felt that it was a calling. Most days I can’t imagine having ever done anything else, with maybe the exception of viticulture. I hope when you look at these physicians, nurses, housekeepers, and other frontline healthcare workers you see the love of God. They did their jobs when no one knew if there would be a vaccine. They did their jobs as people continued to not wear masks and acted irresponsibly. And, they did their jobs with inadequate PPE, squabbling politicians, policies made by people who knew and cared nothing about public health, deaths of coworkers, and through myriad lunatic conspiracy theories.

When I imagine the love of God the mental image will be of the masked face of a healthcare worker.