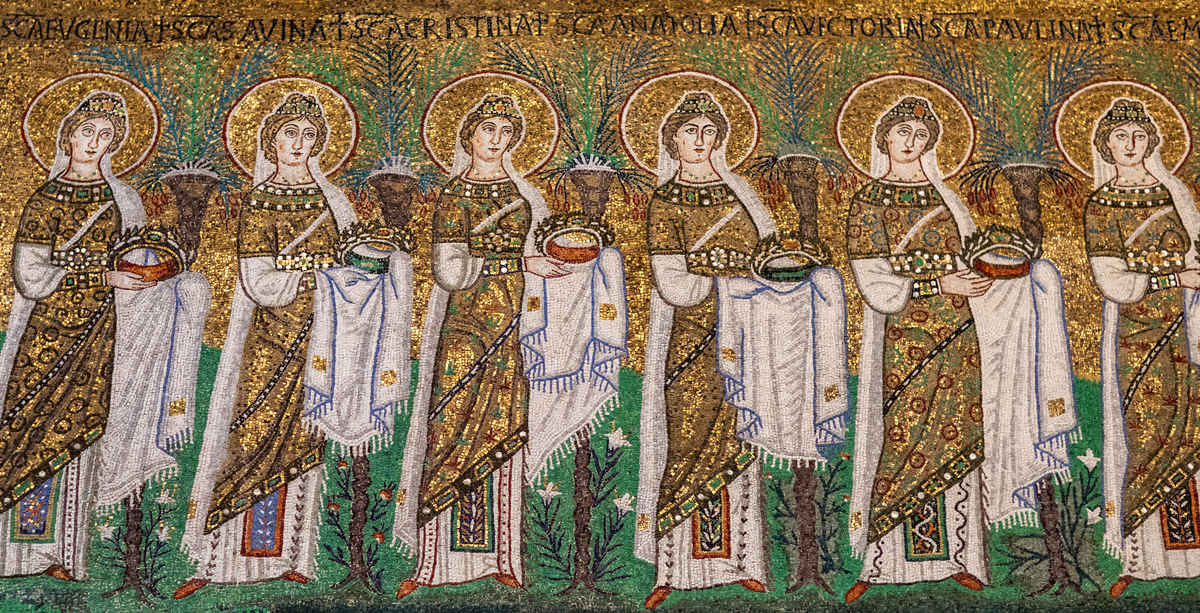 A detail from the “Procession of Female Saints,” a Byzantine mosaic in the Basilica St. Apollinare Nuovo in Ravenna, Italy. By Visual Intermezzo – Shutterstock.com

I am writing to ask that you call women to be ordained deacons in the ministries of the liturgy, work, and charity. I am aware of the committee findings, but at some point, we must admit the evidence is clear. To say it is not is to ignore facts and history.  When we ignore the truth about women we are all diminished.

There was a time when I prayed every morning and evening and attended daily mass, but in the last few years, I have found it harder and harder to pray. The acts of men scream in my soul that women are less than men and do not share the same human dignity.  It is so loud at times it drowns out the voice of God. I question how I can belong when I’m seen as less than a man. When I express my pain over this issue there is a segment of the Church that is condescending, insulting, and generally hateful.

The history of the ordination of women runs throughout the early church. In fact, the only person called a deacon in the Bible is Phoebe. There are even documents saying how old a woman must be to be a deacon. I understand that many people have theological arguments that relate to the Priesthood, but those are rules implemented by men in more modern times. Do we really think we are closer to God than was the early church?

I want someone that can minister to me and understand my life experience, needs, and desires within the church. When I read With God in Russia about Walter Ciszek, SJ ministering to men in the Gulag I was moved and saddened. I could not help but feel pain for the women I had never met. Fr. Ciszek was able to minister to the men in a special way, but the women were alone. Did God abandon them? Did God think men more deserving or did the hardened hearts of men cause greater suffering for women then as they appear to today?

I have spent most of my adult life as a nurse working with the poor, the underserved, and those experiencing a disaster or seeking refuge in the United States. I now teach nurses so that others will go out and do the same.  I can’t imagine teaching them that because they were born male or female they couldn’t be a nurse. Likewise, I can’t imagine a world where there is no role for women to preach and minister.

When I worked in a prison almost all the ministers were men and so men in prison received greater pastoral care than women. We need more space in the church for women and especially for women that can go into the world and preach and minister to us in a way that men have not.

I believe in the equality and dignity of women and I struggle with a church that does support women as it does men. Please ask women to step up and be ordained deacons. It would send a strong message to the world that women have equal dignity with men, that we have value, and that we have much to offer the world.

I pray that one day I, and all women, will feel at home in the Church. I ask for your prayers and hope you receive this letter with the love and compassion with which it is intended.

The letter was inspired by women who I highly respect for their tireless work on the issue of women deacons. There is more information on women deacons in the Catholic Church and I hope all people will prayerfully consider writing the Pope. Women are not less than men. The question is do we let ourselves be run out by those men or do we stay and fight for justice? I think the Catholic church needs a new generation of Suffragettes.

I commend to you our sister Phoebe, a deacon of the church at Cenchreae, 2 so that you may welcome her in the Lord as is fitting for the saints, and help her in whatever she may require from you, for she has been a benefactor of many and of myself as well. (Romans 16:1-2 NRSV)