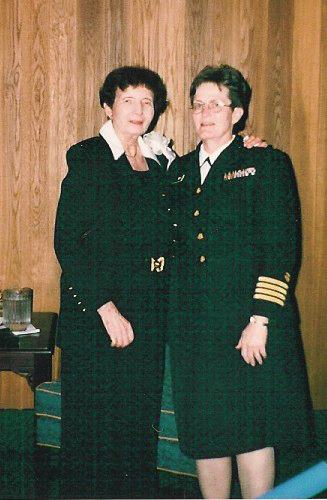 It is a good week to say thank you to all the nurses that helped me along the way. If I talked about one each year between now and my old age I would not be able to thank them all so today I want to start with just two, CAPT (ret) Cecelia Reid and Chris Kasper.

When I finished my MSN I had to report to duty the next morning in DC. I walked out of graduation, picked up my diploma, handed my father the keys to my apartment because he was going to meet the movers, and got in the car so that I could report at 0800 the next morning. I could not have been more excited. When I arrived a serious looking Captain in Service Dress Blues ask for my ID, slapped it down on her desk with her hand over it and ask me for my ID number. When I told her the number without a moment’s hesitation she smiled and we have been friends ever since. She was my first role model as an officer.

Cecelia recommended me for deployment on an NOAA research vessel to the South Pacific for two months that turned into three because we sustained damage going through a typhoon. She did forget to tell me that we would be going to the Aleutian Islands and into the Bering Sea first, which would have resulted in some warmer clothing. It was the greatest adventure of my young career.

Cecelia was there when a patient pulled a knife on my unit and she was there when another patient was so violent that all the nurses and psychiatric nursing assistants (PNA) were wrestling on the ground with him screaming at the psychiatrist to call a code. I still remember that woman saying, “You can handle it. You can handle it.” The words I used to get her to call the code shocked me. I think it was the first time I was disrespectful to a physician or an elder, but then again we were getting our butts kicked by the patient on PCP that should have never been released from the restraints.  She was also there with a sense of humor when a psychiatrist complained to her and the Chief Medical Officer that I called her incompetent in rounds. I did not. I called her a blanking idiot. In my defense, it turned out the psychiatrist had never passed her boards and somehow in ten years the hospital had not noticed. I noticed when one of the PNAs informed me that she was removing my orders from the chart every night and returning them in the morning. Needless to say, what she did could have endangered the life of the patient. Obviously, the psychiatrist didn’t say what provoked my inappropriate comment, but when I told CAPT Reid it resulted in the discovery that the psychiatrist didn’t have a medical license.

Cecelia was supportive when I ask to transfer to the Federal Bureau of Prisons and she arranged a temporary duty assignment for me with Indian Health Service when I was working in DC. She wrote my nomination for my first early promotion. She wrote one of my reference letters to my Ph.D. program and she is still always there when I write or call. Cecelia is that nurse you want to be when you grow up. She is kind, compassionate, organized, intelligent, creative, and always looking out for her team. What I didn’t realize as a young officer was that when you were on her team it was for life. She is still the nurse I want to be.

Chris Kasper is an academic through and through. She never stops thinking about how to make nursing and healthcare better. Her life is academic research and training the next generation of nursing researchers, and now Dean. When I first met Chris she knew I was doing some work with AFRRI and ask if I would find out if they did any research with muscle. The next time I was there I ask and was introduced to a scientist that had the answer she wanted. I never imagined it would result in her being my dissertation chair, a lifelong friend and mentor, or a total change in my career path. She said noone would ever doubt I could do policy since I was a Chief of Staff, but I needed something else when I moved into academia. She knew I would.

Chris is one of those rare people that see through the illusions and delusions. She knew better what I needed to do to be successful than I did and guided me down the path. She is the first person I told I wanted to move to academia, after my husband. She had perfect advice and helped me with negotiations along the way. Anytime I’ve changed academic jobs my first call has been to her to ask if it was a wise move. My success in academia is largely due to her guidance and letter writing.

Chris and Cecelia couldn’t be more different in their career paths, but they had four things in common:

Happy Nurses’ Week to all my mentors and friends.