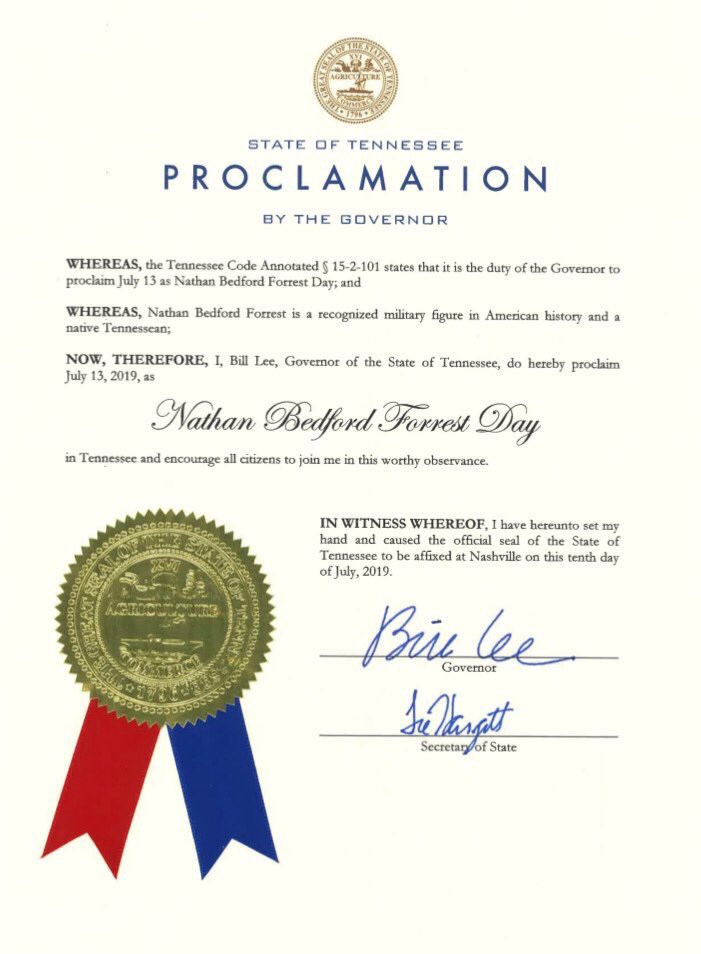 The first time I heard of Nathan Bedford Forrest was in Tennessee history in Junior High School. I’m not sure how much of his background was emphasized, but I also don’t remember him being presented as an honorable man. Prior to the Civil War, he was a repulsive human being who amassed his wealth as a cotton farmer that depended on slave labor and selling human beings into slavery among other business endeavors.

As a Civil War Army General, he was considered to be a good military strategist though clearly not an honorable one. Under his command, he ordered the massacre of Union soldiers, mostly black and some white Tennesseans fighting with them. Even at that time killing people who had surrendered was not honorable.

After the Civil War ended and all of those who had been held as slaves were freed Nathan Bedford Forrest continued a life that dishonored the state of Tennessee and the United States. Since he could no longer hold slaves he became the first Grand Wizard of the Klu Klux Klan which terrorized people of color. He denounced the violence in his later life, but even then apparently lied about his role. All he actually did was change his focus to a different form of slave labor.

After he left the KKK he secured the use of people who had been convicted of crimes to clear his land and work the same land. He used 117 prisoners to grow his wealth. Forced labor of prisoners is a stone throw from slavery at best. It should not go without notice that the majority of those people were black and in that era, the chances they had a fair trial was slim to none. They took black men and women out of the illegal chains and put them in the chains allowed by the law of the time which was incarceration.

It is true that state law in Tennessee mandates an annual proclamation, but it states:

Each year it is the duty of the governor of this state to proclaim the following as days of special observance: January 19, “Robert E. Lee Day”; February 12, “Abraham Lincoln Day”; March 15, “Andrew Jackson Day”; June 3, “Memorial Day” or “Confederate Decoration Day”; July 13, “Nathan Bedford Forrest Day”; and November 11, “Veterans’ Day.” The governor shall invite the people of this state to observe the days in schools, churches, and other suitable places with appropriate ceremonies expressive of the public sentiment befitting the anniversary of such dates.

The governor has the ability within the law to interpret appropriate ceremonies expressive of the public sentiment and befitting the anniversary of such dates. It is clearly within his authority to add language to the proclamation that states that it is appropriate to use this as a reminder of the evil of racism, our history of slavery, and the disgrace of being the home of the first Grand Wizard of the KKK. He could use the proclamation to call for a day of service to promote racial justice or as a day he gives clemency to deserving prisoners. There are many ways the law could be fulfilled that don’t continue to celebrate the man that had no honor and does not deserve our respect.

Until the day the Tennessee representatives change what is clearly a law that celebrates our racist past we should all ask and expect the governor to act with honor by preparing an appropriate proclamation. And if he refuses to act in an honorable manner there is nothing that stops us from planning now to make this a day that addresses racial justice in our communities.

When the elected officials refuse to lead with honor it is should never be the case that the citizens remain silent and do not act. We have a year to prepare. Let’s get started.