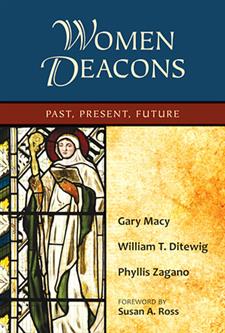 When I was a new nurse the Officier in Charge gave advice about how to manage meetings as one of the few women in the room.

When you know the meeting will be contentious bake cookies.

While we might imagine that Bishops and Priests are stuck in their male-dominated mindsets that see women as less than and will never change it wasn’t until this past year that there were more women in medical school than men. Fifty years ago I guarantee you that most physicians could not imagine a woman as the head of surgery or the chief of staff or any other role in the hospital leadership except in nursing. We have now had female Surgeons General. Those graduating female physicians are entering an entirely different environment than their mothers did because their mothers fought for their rights. In the next 20 years, we will see equal representation in leadership in healthcare. Let’s not let it stop there.

It would be nice if getting the Pope to move away from the misogyny that has dominated the Chruch was as simple as baking cookies. Yet, there may have been more to the baking cookies advice than my feminist ears could hear in my twenties. It could be that she had learned how to make powerful men drop their defenses around a woman that was smarter and more determined than they were. Should we have to bake cookies, absolutely not? But, if we want to win the battle for equal human dignity we need to figure out how to break down barriers.

I consider myself a feminist. Granted from the school of us born in the 1960s when what we wanted was the right to only bake cookies because we loved family and friends and not because it was an obligation or a way to get men to listen to us in meetings. It was all about equality. Maybe it is time to send cookies to the Vatican since it is a behavior that seems to disarm men who view a woman as less than. Clearly coming to the table with evidence and a historical record didn’t work. The problem is I’m annoyed and so I want to lash out at misogyny. Honestly, I would rather fling the cookies at them.

Like any good nurse, I know that the world is filled with misogyny and people that refuse to believe the evidence. How many patients believe there is a magic cure to their knee or back pain but refuse to recognize the extra hundred pounds they are carrying is making it worse? How many providers continued to do unnecessary test long after the evidence shows that it results in unnecessary procedures? Yet nurses teach and advocate even when we know the person isn’t ready to hear us.

The Pope made clear he didn’t have ears to hear. I for one need a like-minded group of people that want to discuss this issue. I want people fighting as hard as I am to stay in the church and not throw in the flag and say if you want a boys club you can have it. I’m taking my spirituality and my faith and going home. The feminist in me says I will die before I will step aside for misogyny and men that still think the world is theirs to control

Macy, Ditewig, and Zagano wrote a book, Women Deacons: Past, Present, Future that serves as an excellent study on the issue of women deacons and they have produced a free study guide to accompany the book. I would enjoy being part of a group of like-minded people that want to read and discuss the book.

Like many people I have a busy schedule and once I’m home from work I’m unlikely to go back out. I set up a Zoom meeting if anyone wants to join me to start discussing the book and then maybe planning what we can do as an online community to advocate for women deacons. If you are interested and like-minded please join. I’m not a theologian so I don’t want to debate the issue, but rather learn and eventually plan some activism. It is my church too and I’m fighting for the human dignity of women.

Roberta Lavin is inviting you to a scheduled Zoom meeting.

The link has a limit of 100 people, but I really doubt that will be an issue. Also, if you have never used Zoom before and email me at roberta.lavin@gmail.com and will happily send you instructions.

One thought on “Women Deacons, a Discussion, a Community”