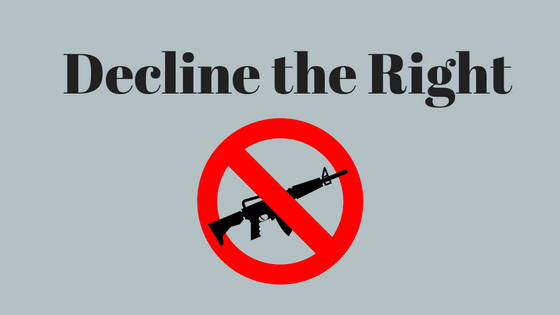 Gun ownership is a choice and a moral decision that has a significant consequence to the entire community. I can choose to own a gun or I can make the moral decision to decline the right to bear arms. This is not to say that all people have a choice to make. Some, by virtue of their professions, must own or carry a gun – police and military. Others may need one for a legitimate reason – ranchers. However, most of us do have a choice. Choosing not to bear arms does not impact anyone else’s Second Amendment right.

Can you remember the last time we have had a day without reading about gun violence or even a few days without hearing about a mass shooting? We average over 9 deaths a day from guns and a mass shooting almost every day. We ask ourselves what is the cause and we hear guns, mental illness, inadequate laws, immigration, gangs, terrorism, and a culture addicted to violence. We look at other similar countries and ask why they don’t have the same problem and the only differences are easy to access guns and/or culture.

In our culture we let fear overrule reason. The argument that the Second Amendment is without limit is not true and is usually followed by the statement that “guns don’t kill people, people kill people.” It is reposted without adequate consideration to what this actually means.  In fact, people who own guns are more likely to kill people either accidentally or intentionally. People with guns do kill people and are more successful at doing so from a distance than by any other means.

This year alone the Gun Violence Archive has documented 52,436 incidents, 13,164 deaths, and 307 mass shootings. This doesn’t even begin to address the actual impact of wives that lost husbands, parents that lost children, children that lost parents, and the countless friends and neighbors that feel the loss.

The Second Amendment is our Constitutional right, but it does not mean that one should own a gun.  I have the right to own a gun and choose not to because I believe they are implements of violence and are designed to take life and only bread evil in one’s soul. Yet this isn’t the only right we have that we can and should decline. Let us decline the right all actions that take a life – abortion, the death penalty, and war. If we value life then sometimes we make decisions not because it is our legal right, but because it is a moral obligation.

“Those that proclaim themselves to be the sole measure of realities and of truth cannot live peacefully in society with their fellow [wo]men and cooperate with them.” –Compendium of the Social Doctrine of the Church

I frequently wonder if we give enough thought to what it means to make a moral decision. I worry that we are so stuck in ideology and bound with fear that keeps us from a rational contemplation of the very serious issue of gun violence and violence in our culture. I am certainly not the sole arbiter of truth, but I have an opinion I hope you will hear and consider

Six-Steps in Considering the Morality of Gun Ownership

People will give various reasons for wanting a gun. They list the least benign as a desire to kill Bambi or Thumper. Some genuinely believe they need to defend self or family and a gun is the only mechanism. Others have a false belief that a rifle will protect from an abusive government that has nuclear bombs, tanks, and other massive munitions. Whatever the stated reason one must consider whether the purchase of the gun to achieve the end is morally right? Do the circumstances (living in a dangerous neighborhood, traveling alone in an unsafe neighborhood, going to school) affect the action? Do the risks outweigh the danger of a gun in the home? This year alone defensive use is barely higher than unintentional shootings. In other words for every person that uses a gun in self-defense, another is accidentally shot.

The more I deliberated the more I reflected on Matthew 5:21-26:

I came to the conclusion that I could not live with a primal instinct to defend my home or self by the use of lethal force over a possession. Nor could I live with accidentally harming another.

It is certainly true that guns are sometimes used for self-defense. This year there have been 1,724 times guns have been used for defensive purposes. Of course, that pales when compared to 54,436 gun incidents in the same time period of which 1,699 were accidental shootings. Is the fear one person has for his or her safety more important than the safety of those around who are by all evidence at greater risk due to the presence of the gun? We are one of the nations with the greatest number of guns per capita and we are one of the nations with the greatest gun violence. People can cite urban vs. rural, and this city or that, but in the end, we are one nation with one shared problem that is violence committed using a gun.

I first approached the problem from a veil of ignorance, which is to say if I were the person who was the least powerful and the most vulnerable what would I want? I concluded that while I wanted to live and be safe, but for that to happen it would be best for no one to have a gun. I also wanted all those around me to live and be safe. The risk to others from a gun in the house was greater than the risk to others and me without one.

I then used a disaster framework to consider what actions I could take to avoid risks that didn’t involve owning a gun. When considered within a framework it is easier to see that there are actions that can be taken, provided the public or individual has the will to do so, to keep oneself safer. For example, self-defense class, active shooter training, non-lethal force, security systems, and even owning a dog.

There really are only a few practical alternatives: 1) accept the status quo, 2) actively advocate for a rational change in gun laws, and 3) decline the right to bear arms and encourage others to do the same. I do not see repealing the Second Amendment as a practical alternative and thus it is not included. There are those that disagree with me including the editors of America Magazine. The Second Amendment is too ingrained in the culture, has too big of a lobby supporting it, and would not be supported by the majority.

Once I made the decision to decline the right to bear arms it was time to act. A moral decision occurs when the intellect and the will come together, but without action serves little purpose. First, I am acting for myself in pledging never to own a gun. I decline the right to bear arms. Second, like many other pledges, people may take I encourage others to also take the pledge and to share that they have. Third, I will never be silent.

The final step is always to determine if the choice and the action was effective. Only time will tell.

I pledge that I will never own a firearm of any kind. My heart will be guided by love and there will be no door opened for fear. When that door of fear is cracked it lets in evil and blots out reason. Not just the reason that comes from a well-developed human conscience, but the reason imparted through faith. When fear enters evil works to darken our souls to the inherent value of all life. That evil convinces us that property is of such great value that we can ignore the commandment not to kill and choose things over people. Fear causes us to listen to evil telling us that there are good guys with guns and that no harm will come from this instrument of death. Arm yourself with reason and faith and there will be no need for a gun.

“The dignity of the human person is the foundation of a moral vision for society” (USCCB). The sanctity of human life and the inherent dignity of the human person cannot merely be about abortion or assisted suicide, but must include protecting all life and that means stopping gun violence and all violence.  Don’t let the lust for an instrument of evil that has taken so many lives and caused so much pain replace reason and compassion. Don’t let your fear win. Decline the Right.

6 thoughts on “Gun Ownership is a Moral Issue”