Last week I set out on a journey to be a better photographer or at least that is how I sold it to myself. In reality, I was trying to find a calming activity that helped me to focus on something other than the stresses of work. In a very short two week period, I submitted my first two

photography assignments and realized that my journey was more about finding my spiritual center. It began with the image of and in the empty grotto. Is a grotto every empty or is what is there always present even when one sees it as empty? Or, is it telling me to empty self.

I can imagine myself kneeling to pray and losing myself in what is visible and invisible. I can see the love and passion of the creator. And, I can feel my spirit as it is quite and at peace.

The next week arrived, and I went in search for a new picture. I was still focused on the skill with the camera rather than the meaning. I went for a walk in a nearby park that I had never visited. It was a beautiful sunny day, and I was on a mission for a picture that would allow me to practice, but what was I practicing?

Not far into the park I came upon a statue of children. Because the statue was under a tree, it appeared as if the children were planning t 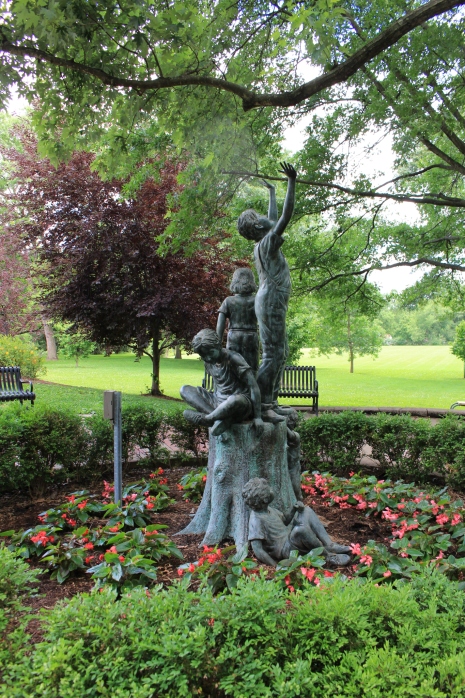 o climb the tree. It was what I expect of a sunny Sunday afternoon – children at play, trees to be climbed.

I liked the first picture. It was technically pretty good, especially since I was shooting in program mode and making manual adjustments.

The assignment required me to work the scene and find a second picture that captured a different perspective. I was at first amused by the optical illusion that the boy could almost reach the limbs as he was sheltered in the shade of the tree and looking up toward the elusive limb.

I probably made 30 pictures and in the end had to select the best alternate perspective. As I sat on the ground and looked up it appeared as if the boy could reach the limb, but now it was as if he was reaching for the blue sky. Aren’t we all reaching for something? How often does it feel that what we seek is just out of reach?

The tragedy is that our consciousness is totally alienated from this inmost ground of our identity. And in Christian mystical tradition, this inner split and alienation is the real meaning of original sin. – Thomas Merton

I believe that in my photography I’m recognizing how hard I’ve been reaching for spiritual meaning and in recognizing my reaching it is allowing the emptying of self.