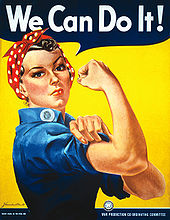 Today is International Women’s Day and we have certainly made much progress since I was a child and my father told me I didn’t need to go to college because I could marry my boyfriend and he would take good care of me.  I’ve always wondered if the Suffragists, Rosie the Riveter, or Title IX had the greatest impact on women’s equality.  Is the vote more powerful than economic independence or is equality in education more important than the others combined?  What I do know is we have a long way to go and I hope we don’t loose our compassion in the process.

During the Presidential election a conservative female friend asked me if I thought there was a war against women.  I replied no, but have more than once jokingly commented, after obnoxious comments like the one about legitimate rape, that I was glad there wasn’t a war on women.  I should have qualified my answer to my friend.  I do not think there is a war on women, but I do believe there is a lot of ignorance that unfortunately adversely impacts women.  It comes predominately from a small minority of religiously conservative men and women.  Unfortunately, there are those who are more progressive, that in their attempts to help, also harm women.

The conservative impacts are obvious to most people.  It is easy to point at the Republicans that didn’t sign the Violence Against Women Act, the ones that wrote laws proposing vaginal probes (a totally unnecessary and invasive procedure), comments about legitimate rape, and a plethora of regressive laws and sexist statements.  What are less obvious are groups like Emily’s List.  They are a progressive group that supports democratic women for office who absolutely must be pro-choice.  To me this is no less an attack on women.  It says the only good woman is one that absolutely agrees with their agenda.  In other words, if one believes for religious reasons that abortion is wrong, then that woman is not worthy to be in leadership as a democrat.  This benign attack on qualified women may be more harmful than the obviously ignorant comments about legitimate rape.  If to reach equality in elected office we require women to deny their conscience then what have we gained?  We have then only said equality applies to a subsector of women.

A female supervisor once told me that I would never be truly successful until I reached “bitch status”.  As I progressed in my career I figured out what she meant.  Essentially, one had to adopt a take not prisoners mentality to be taken seriously by both male and female colleagues.  One day I looked around and saw the people I considered the greatest leaders.  They were intelligent, hard working, and exceptionally kind and compassionate and they were all men.  Men did not have to prove themselves in the same way.  Kindness and compassion was not seen as weakness or lack of intelligence nor did men attack each other in the way women did.  The people who had been the most undermining in my career were all women. I examined the person I had become in the drive to succeed and realized that wasn’t the person I wanted to be.  If it took “bitch status” to succeed, the price was too high.  We must be able to be successful without feeling the need to exclude other women.

Success and equality as a woman should not be perceived as competition with men and it certainly shouldn’t be competition with other women.  We should be making every effort to bring other qualified women up with us.  Equality requires that people see us as equal and that should mean that without thought we are paid the same, promoted the same, elected at the same rates, and granted the same access to education.  In the mean time we do not have to be like men to be successful and we do not have to compete under their terms.  We must be careful that as we succeed we do not eat our young and harm women in the workplace.  We can continue to push equality in education, work, religious life, sports, and politics without loosing our compassion in the process.  We can lead and at the same time allow alternative work schedules, freedom of conscience, and freedom choice in more that just reproductive health.

On International Women’s Day I salute all the women that are working to enhance equality.  I look forward to the day that our government is inclusive, our religions are inclusive, and worldwide education is inclusive.  Until then, I hope all women will lead out loud.

One thought on “We Can Do It Without “Bitch Status””

This site uses Akismet to reduce spam. Learn how your comment data is processed.

Meditations on Philosophy, Strategy, and Life